“Each of us owned a small island in the brook on which we built houses and miniature fortifications and had battles which Arthur (the worlds historian) made very stirring with accounts of spirited charges and valiant repulses,” Walter explains in a sketch he titles “Our early Play-Times.” Actually all three Nelson brothers proved historians of this imaginary world, documenting these fantasy places in the erudite and objective form of a host of reference works in quite an array of genres: catechism style school geography texts, encyclopedic texts arranged in alphabetical order with “statistics” at the end, narrative histories, a wide variety of maps, and even books displaying the flags of each place. The facts recorded about these fictional places are remarkably consistent between the many reference books the boys produced. 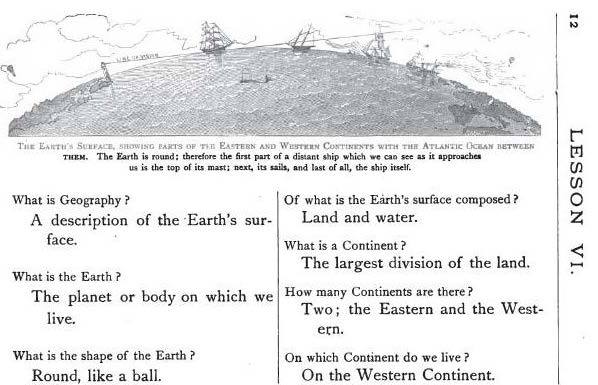 Mary L. Hall, Our World, or First Lessons in Geography (Boston, 1882) is one of many period school books written in the two column catechism format that the boys adopt for their geography text. 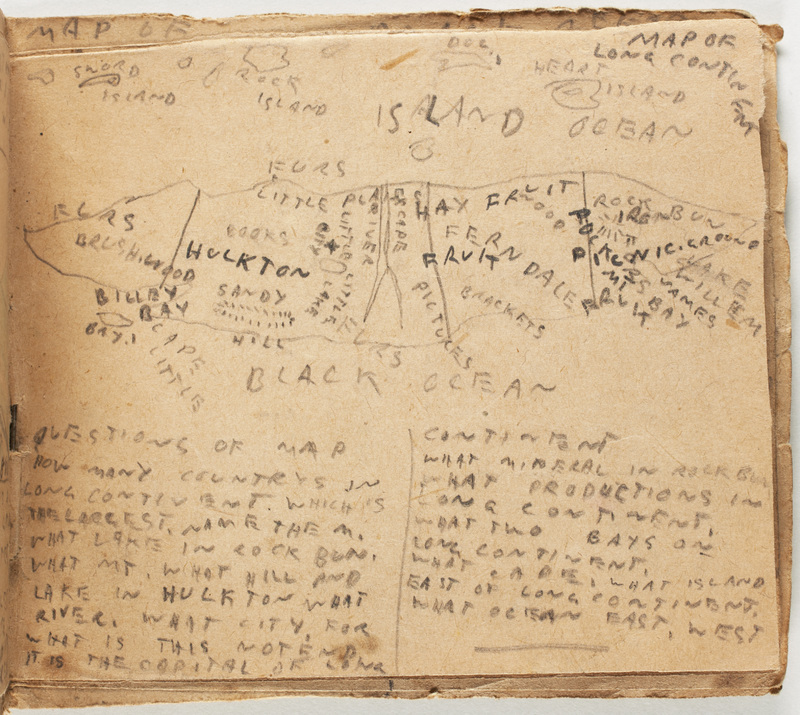 Map of Long Continent in Complete Geography of the World, followed by  a list of "questions of map" like a good school book.

Throughout the Nineteenth Century, geography figured as a core element of an American education. Maps and globes were prominent features in most classrooms of the period and learning how to read them was considered nearly as important as reading itself. Clearly the Nelson brothers had geographical training, and they take pride in their skills as they chart their imaginary world with its hemispheres and continents.

The roughly drawn and badly spelled Complete Geography of the Wourld appears to be one of the boys' earlier efforts to document the spaces of their imaginative play. It is arranged like a school geography text with questions and answers in column format. Much like this page of a period school text the first page of the Nelson's geography asks and answers: "what is geography? Geography is a description of the earth its inhabitants and cities. What is geography for? To tell the people of the land and its surfaces"

"The world was all moste all a wilderness but renoun explorers have made this world a good and nice place" the book begins, and the boys are clear about how their mapping and recording produces the good. "Round and Long Continents are the best history and story righting in the world, and best artests" they write with obvious pride. A later page of Complete Geography of the Wourld tests its reader's skill at interpreting maps. "What productions in Long Continent" the boys' ask in their "Questions of Map." This map records not only "fur," "hay," "iron," and "fruit" among Long Continent resources but also "books" and "pictures"! 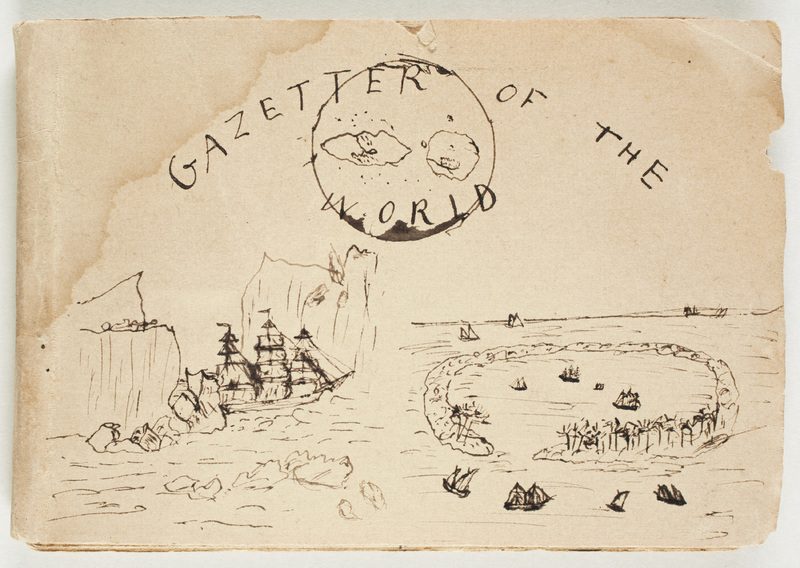 Cover of Gazetter of the World

The Gazetter of the World with its elegant ink drawings and detailed descriptions, records in more elaborate and encyclopedic form the very same historical and geographical information described in this earlier book. The boys show vigilant concern for the accuracy of their reference books; thus they amend the Gazetter's explanation that Alderton "has no large cities but has several small ones, mostly manufacturing"  with a note in the margins explaining that "this is a mistake. Colony City is in it." Their dedication to precision does not quell however their delightful and extravagant pleasure in exaggeration--they love measuring things, and almost all the measurements they provide are enormous. So Briarwood stretches for 20,000 miles (about 5000 miles short of the circumference of the earth's equator). 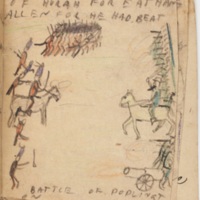 Battle of Poplington from The History of Long Continent 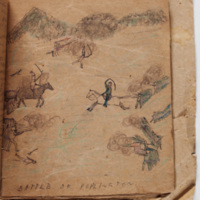 Battle of Poplington from the History of Big Continent 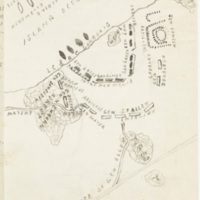 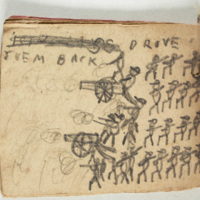 The rich coherence of the Nelson's imaginary world is particularly vivid in the many narrative histories they produced. Thus the separate volumes in which the boys record the histories of the World and of Big Continent and Long Continent all recount a battle between these islands. These tellings express different perspectives and loyalties but they adhere to the same basic plan of battle and provide similarly lavish full page illustraions despite the different skills and ages of the artists. 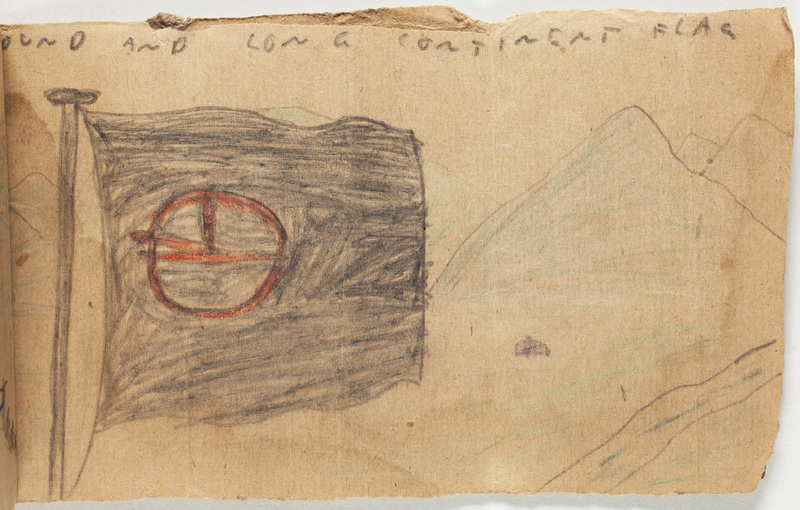 A flag of Long and Round Continents from one of three flag books in the collection.

In the books of flags they create, the boys include the new flag of a confederated Round and Long Continent that marked the alliance between Elmer and Arthur's islands, an alliance narrated in these history books.

Among the many items for sale in the exuberant advertising pages at the end of the Nelson's home-made periodicals, is one for an educational "Geography Game." The land mass drawn on the box-cover for this game clearly comes from the brothers' imaginary world: this is unmistakably not North America, Asia, nor Africa, but Big Continent! 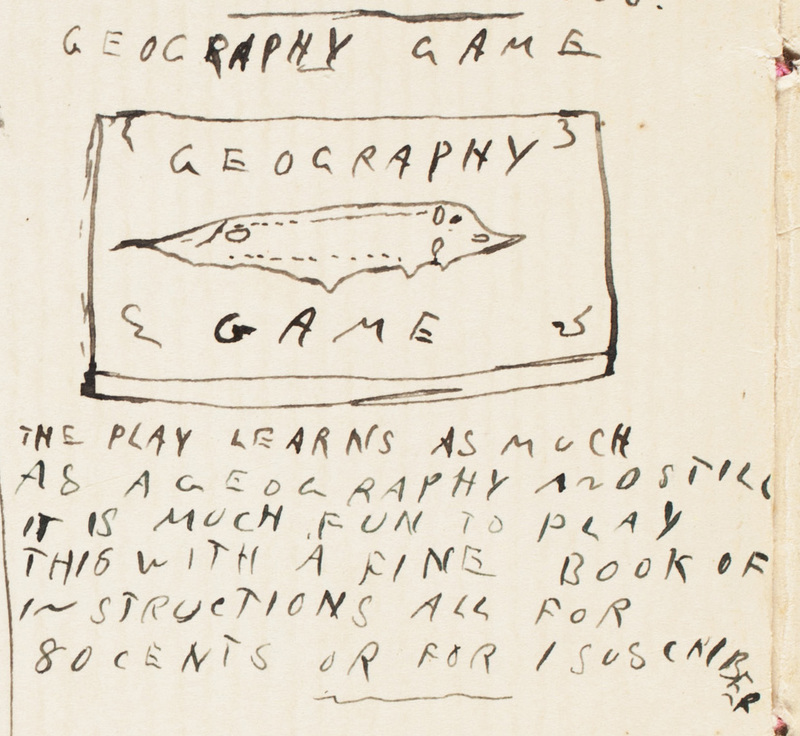 Advertisement for a geography game from the back pages of the January 1893 issue of the Nelsons' magazine Chit Chat.

This respect for reference books is evident in the Nelson's adventure stories as well which often contain maps and in which characters frequently rely on expertise garnered from their reading. Thus in The American Family Robinson Vol. 1, Jimmy recognizes that the animal Fred shoots is a "kangaroo by the tescriptions of the histry they found in the library."

When Walter, at twenty, was convalescing "after a serious infection arising from a dog-bite," his mother suggested that he produce a history of the town of Goshen. He did: "During the early spring of 1903 I took the job of splitting nearly thirty cords of beech and maple block-wood for uncle Oren Farr and invested the proceeds in the smallest --and cheapest-- printing-press advertised in The Youth's Companion, that most valuable household journal of the time" he would recall in 1957, when he returned to this historical work  expanding his convalescent entertainment into a comprehensive History of Goshen, New Hampshire (5).

There is however insouciance as well as respect in the boy's attitudes towards such tomes. In 1899 in response to a school assignment titled "My Library," Elmer acknowledges that reference books can be boring. He explains that although he owns "a Wood’s Natural History and a set of Chamber’s Encyclopedia, the last names receives the least attention though I occasionally find something that I do not know and so have to consult them," and adds "I also once began Ridpath’s History of the World, but it was so great an undertaking that I gave it up."