This letter is largely an update of life at home. Elizabeth tells John about how his brother Edward has just left for Northampton, and then he will continue on to Troy. The previous day was the fourth of July. Elizabeth speaks of the celebrations, but they are muddled due to many indecipherable words.

Elizabeth resumes her letter the next morning. She talks about how the boys often go fishing and about the abundance of fruit they’ve experienced at their home.

She then gives her son some advice. She wants him to spend his Saturday nights and Sabbath days in his room with his Bible, much like many mothers today advise their children in college not to go out on weekend nights. .

Elizabeth runs out of paper and realizes that she has perhaps not answered all his questions. But she promises that if John returns home, he will have all his questions answered. Elizabeth clearly misses having her son around and longs to see him.

Edward has just left us. Theophilus has gone to carry him to Northampton, to take the stage at two o’clock tomorrow morning. And he will probably reach Troy about sunset. he worked much to write you a few lines, but you know how it is here, in haying time and [showing] beside—for the purpose of giving all the assistance possible, he defered writing till this afternoon, and then began, and [indecipherable] this letter. but your Pa said it was time to go; so he left it and I took it.

We shall all miss him very much; little Frederic sobbed aloud. and when I attempted to comfort him, he could only say— “he always did every thing good to me.”

Yesterday was the fourth of July—a great day—and distinguished by great efforts. In the morning Edward carried Charles to Northampton. stayed and heard the Oration delivered by Mr. Baker of Amherst, student of Law in Northampton —very good—he then returned having Charles to attend the Law fairly at Northampton. [not] back just time to eat a bit of dinner and wait on Bethia to the Academy. Francis and Marianne also attended -- with a multitude of young folk, that I cannot have time to name if I know them. Well what do you suppose they did when they all were assembled in the Academy Hall. why in the first place Mr. Woodbridge made a prayer then his divinity student Mr. Brunston gave an oration rather a queer thing too I suspect—from what I can [hear]. then they drank wine lemonade with a number of toasts [indecipherable] to the occasion. then those who chose to walk sallied forth, fearful that rain or nightly dews, would spoil their Denmark satin shoes. Bethia and some others were content to stay behind. It was about ten when they returned—and it is about that time now—so I bid you goodnight.

Now for answering your letter. let me now; what is the first question? you wish to know what Mrs. Willard wishes of Edward. probably he will keep the accounts purchase all the provisions for the family assist in settling the estate —and supply the place “of a son”—this is her own expression.

We are all hoping to see you and William while Elizabeth is here. the little girl resembles Mr. Fisher I think, more than her mother. We were gone at the time of fishing—but I believe they did not catch any [shad]. the boys have been several times, and caught a [taste] of hook fish for us. the day we returned from Boston, Charles Edward and Theophilus were gone fishing, and did not return til sundown which was quite a grief to Theodore, as Theophilus was so soon to leave home.

We have had an abundance of raspberries—tho’ no white ones, the bushes are all dead. our currant bushes are loaded—and we have had quite a good supply of cherries. the tree east of the parlour window, bore more than it ever has before—and they are an excellent kind.

I would advise you to spend your saturday evenings and sabbath days, in your own room as much as possible; there with your Bible, a [free] religious book. and a prayer hearing God, you can spend this time, not only with comfort to yourself, but acceptably to him who is ever near to those who call upon him in sincerity. I think it would be well, sometimes to accompany William to his place of worship.

I rather think you had better buy you a pair of their handsome pantalones. your stockings you have got before now I hope. allways [keep] yourself clean. and if William thinks any article of clothing [wanting]—be sure and get it. I have filled my paper and perhaps have not answered all your questions. but if you will come home with William soon you shall have them all answered and will give joy to us all especially to your affectionate mother Elizabeth.

either burn this or lock it up in your trunk. Yesterday Matthew had another son born they intend calling him Charles [indecipherable].

You will see what Charles has written on Catherine’s letter, that his health and spirits are improving. Remember me to Mr. and Mrs. Hall and the young ladies. 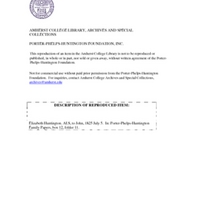