In the first half of this letter to his mother, Edward talks about himself in the third person. He begins by recounting when the men of Leverett sent his father (Dan Huntington) a letter, asking him to send Edward to them as a priest. Edward goes on to say that he eventually agreed to teach the men of Leverett in the ways of Christianity. He later talks about an encounter he had with a woman in Deerfield, who he considered marrying. However, he also describes the disapproval he faced from both his mother and father regarding his desire to marry that woman. In the second half of the letter, Edward talks about wanting to settle in a cottage near his office in the near future. He expresses a desire to have a wife to dwell with him in the cottage, as well as friends to visit him there. Edward continues by stating his concern for his mother's health and telling her that Mr. Davis' health is poor. He closes the letter by asking his mother for prayers, as he has many tasks to complete in the near future.

My dear Mother,
1. Now it came to pass in those days that the dwellers in Leverett round about Mount Holyoke the way as thou goest up to New Salem followed after a vain young man whose parents dwell in the valley of Connecticut.
2. And the man of Leverett Hadley even the father of the young man had a House of God and he [convinced?] one of them to be a priest.
3. And the young man ministered being a child [grided?] with a linen ephod[1].
4. Moreover his mother made him a little band and many useful articles of wearing apparel.
5. And the men of Leverett sent a message to Dan and said send thy son up hither to teach us.
6. So the young man girded on his linen ephod and took this then in his hand and went up and taught the men of Leverett.
7. And they said to the young man, dwell with us and be to us a father and we will give thee two dollars a sabbath and a fruit of apparel and thy rituals.
8. And Edward went up to Deerfield and saw a woman of Deerfield of the daughter of the Whigs.
9. And he had said to his father and his mother I have seen a woman in Deerfield now therefore get her to [indecipherable] to wife, for she pleaseth me well.
10. And his mother said, is there no woman in Hadley thou canst get to live with thou from among the Tories?
11. So after she had given him a box stored with the [loors?] However you should not feel bound to [accepence bush?] things of the [land?] he returned to his house.
12. And he reflected within himself and said Mother thou knowest the loaf of wheat bread that thou gavest me on the day that I witnessed from Deerfield behold as I was breaking it this morning and thousands of small ligaments all aching part to [part?], resisted my [many?] efforts. So he marveled at it and ate it.
13. And he looked and behold in the bottom of the box he saw a shining plate of English pewter; and he said within himself; Now I know of a truth that this is the pewter [which?] my mother promised me against the day when I take unto myself a wife; so he resolved to take it.
14. Now Theodore fed his father’s flocks in Hadley. And he gave unto his brother Edward some cocoons made by the silk worms which he fed. Mr. Edward was a [headless?] man and he put the cocoons into his coat pocket. And as he sat him down in his chariot the [indecipheable] map destroyed the symmetry of the cocoons producing an [...ibilian?] fluid nowhere described in the books of the apothecaries, [...balness?] on [perfumes?].
15. Howbeit he was with angry for though his sleep had departed from him early in the morning, his thoughts were as the things that had lately happened and he felt that he had been in the presence of an angel and had been strengthened thereby.
I wanted to say a few words to you, my dear mother this week and as a letter from you and Frederick are the only ones I have I am obliged to answer yours this noon. However you need not feel bound to answer me. I got home right [sir?] up about 6 o’clock Monday morning. If I am turned about elsewhere I know the [bounty?] of compass [putty?] will at Cabotville. I shall probably take a little cottage near the office for a home and probably get a [indecipherable] for it the first week in October. Where it is agreed on I will let you know.
I find I can [indecipherable] off an end of the shed where I can [indecipherable] in a carriage and keep a house, where some very near friends align to visit us.
I have written once or twice about some [...cacia?] [said?]. I do not [dr….?] then having [suspected?] them where I was up. I thought of the journal [t...es?] but never when it was night.
If convenient please mother buy the book or [buy?] Theophilus’s when he comes down. Perhaps they have not got one from Charly yet.
This weather is [formidable?] to your health. I hope you won’t forget to take the [indecipherable] [indecipherable]. We [indecipherable] in making the proposal to the [Wakefield?] folly to have his brother at the [great?] to accompany you. Mr. Davis is [always] on a visit to his friends at [Shr….?]. His health is bad.
I shall want your prayers and council in the many untried duties about [choosing?] on me.
God bless you all. Goodbye.
Tell Martha not to forget to read the poetry of Mary.
Edward. 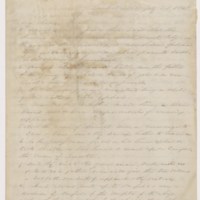 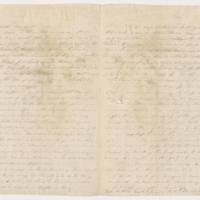 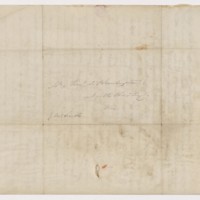