Edward Huntington wrote this cramped letter to his mother in the midst of his studies
away at college. It opens affectionately, but Edward quickly moves into a discussion of his
friends and his philosophy of life. though much of the letter is indecipherable, due to Edward’s
scrawling script, what is evident is his use of Christ and the bible as an inspiration not only in
how to live life, but how to think about life. The letter is highly philosophical, and includes a
reference to Stocism and to Virgil’s Aeneid. He spends most of the letter reflecting on the nature of friendship in relation to living a good, moral life. He also reflects on the death of his sister Mary a loss that occurred less than a month before the date of this letter.
As the letter goes on, Edward’s handwriting, already difficult to read, becomes impossible to decipher, as he saves space by compressing his writing. The last paragraph is essentially unreadable. However, in the second to last paragraph, some clues point to Edward’s awareness of the outside world; he references New York state (abbreviated NY), and mentions Judge Lyman, a Northampton native. While Edward’s account is fragmented and obviously incomplete, it speaks to the various ways in which he was connected to a wider social, philosophical, and theological world.

[1] The two quotations come from Virgil’s Aeneid and from Proverbs 27:17. William was clearly considered the better Latin scholar of the two brothers. 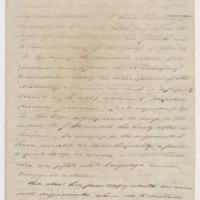 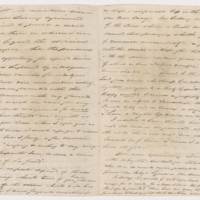 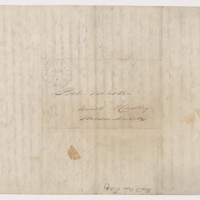