In this letter written on September 21st, 1845, Elizabeth Huntington addresses her son, Frederic. In the first paragraph, Elizabeth writes about Frederic’s job as a minister. She seems very proud that her son has grown up to be a focused man with a good profession and continues to wish him success. She expresses her interest in visiting Frederic in Boston to watch him. Elizabeth goes on to talk about her family members’ health. She discusses how Charley, Frederic’s brother, is ill with a fever but he is recovering. In the depths of his sickness, Bethia, Frederic’s sister, took care of him. Susan, Frederic’s aunt, is also sick, but Theodore is in great health. In fact, Theodore, Frederic’s other brother, and his immediate family are going to take a trip to Abington and Providence. The subject then switches to agriculture. Frederic’s father has hired an “Irishman” to help him on their farm. He is described as positive and hard-working, but his real name is not mentioned. Elizabeth also writes that her husband enjoys reading Frederic’s articles in the magazine he writes for. Like before, she makes it known that she wants her son to be successful and she hopes that Frederic has written some of the articles where she has trouble deciphering the author’s signature. She then signs her letter with “unwavering affection” for Frederic. 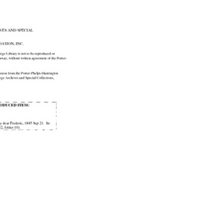