This letter is part of a correspondence between Elizabeth Huntington and her son Frederic Dan Huntington. The letter discusses the health of Elizabeth's family, particularly John and Charlie. Both are plagued with a delirious fever, and Elizabeth was prepared for the illness to take a fatal turn. However, by the grace of God they are on the road to recovery. Elizabeth then updates Frederic on his father’s job at the farm. He is working on a project of clearing and burning a large piece of land, and has hired thirty people to help with this task. Frederic seems to have lost touch with his parents after moving from Boston.. She suggests that his garden and religious obligations leave no spare time for him to write, but stresses that his religious life is of the utmost importance. She goes on to question Frederic’s parenting, suggesting that he has not properly established authority over his child. She laments the current state of child discipline, with children seemingly controlling their parents, and gives suggestions for how to avoid this. She ends the letter by praising the Lord, and thanking Him for the many blessings He has bestowed on their families. 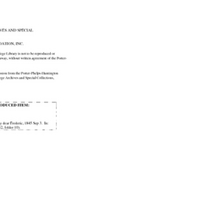