This letter is addressed to Edward Huntington, the son of Elizabeth Huntington, and was written by Elizabeth Huntington on his birthday. She first writes about Dan Huntington’s doings in Northampton, while he attended a funeral she went shopping and heard news of a man who had taken his own life. Elizabeth feels sorrow for the family but hopes for religion to bring them up. Elizabeth then goes on to update Edward on the health situations of some other family friends as well as herself. She says that she is feeling better, but she puts her focus on God and his blessings. Elizabeth briefly writes about what some of her sons, Edward’s brothers, have been doing recently: arrangements in their homes and work on their farm. On the back side of the letter, there is another message that has no formal address or names but states information about Mr. Atwood, the making of butter by the family. Elizabeth requests news of Edward’s garden and describes new plantings at Forty Acres.

Elm Valley April-25th-1842-[1]
My Dear Edward,
I have been looking forward some time to this day (your birth day) as a starting point, on which to resume my part of our correspondence. I find on examining that your text was dated Jan. 13th I may as well confess the truth and save half the cost[2], as they say in law. But I shall carefully avoid attempting to make an apology - knowing what an utter disgust you feel for these things. Your father was called to Northampton this afternoon to attend the funeral of Mrs. Mann. The aged mother of Mrs. Cephas Clapp[3] and Bethia and I having a little business to do at the stores, improved the opportunity to ride over. while there we were informed that Cooley Wells of Whately[4] had put an end to his own life today by strangling. we did not learn any of the particulars, except that he was missing three hours before they found him. How often and how deeply has Mrs. Wells been called to drink of this cup of sorrow. May she find the consolations of religion[5] neither few nor small.
Mr. Atwood left your letters to Bethia last week, and offered to take one for you this week on his return. Tuesday evening - I am very sorry to find that Helen's[6] health suffered so much from the kind attentions she paid her friends. we must in future be more careful and by making our visits at different times avoid the evil of making ourselves burdensome. you kindly inquire after my health[7] I think it is improving gradually. Instead of complaining, I am sure our hearts should be full of gratitude for His multiplied and useful helpings. Let it be our care, faithfully to improve, as well as to enjoy them. I regretted very much that we missed the opportunity of sending you a little butter[8] by Mr. Smith. should we know of another we will try to improve it. Theodore has been turning about his house on Mount Warner[9], and making sundry new arrangements. this together with the farm keeps him and his boys very busy. Theophilus takes quite an interest in the little stranger, and well he may - for he is a friendly little fellow. your father has been obliged to take charge of the pulpit[10] at Northampton for the last and the next sabbath. in the mean time he is hoping to hear that friends have made some provision for him in the vicinity of Boston. Charles has been planning a little trip to Springfield with his wife for this week and of course a call upon you and Helen, but we found yesterday that little
Mary was quite sick, threatened with the lung fever[11], which may prevent their going. Bethia will give her own account of herself. she is not as remiss in letter writing as I am. It is growing late. The Lord be with you and yours now and ever.
Most truly affectionate mother Elizabeth.

Friday evening - after nine. Mr. Atwood does not call perhaps he has given us the go by - and perhaps he will call tomorrow. We have put into the kettle five pounds of butter. two and a half of which on the top is sent by Theodore. If he is not with willing to take it we shall only be where we are now. Your garden, of which we heard so much, continues to be an object of interest when it is finished. Do give us a correct and minute account of it. we purchased some of the balsam of fir today and Bethia has one set in the center of the circle.

[1] Edward Phelps date of birth (see Elizabeth's reference below).
[2] Law reference - most likely refers to pleading guilty, as Elizabeth admits that she is late responding to Edward's letter.
[3] Cephas Clapp was listed as the Deputy Jailor of Northampton in the 1829 MA Register that contained Civil, Judicial, Ecclestial and Military lists. Additionally a Mrs. Clapp was mentioned in the novel, Spider in a Tree by Susan Stinson, about Northampton and the Great Awakening
[4] Whately, Massachusetts. Located west of Amherst, between Northampton and Deerfield
[5] The 1820's saw religious revival in which Unitarians, Methodists and Baptists joined the once popular Congregationalist Church. Elizabeth Huntington joined church at 19 and married a reverend, but in 1828 she was excommunicated from Hadley Congrationalist Church after stating that she didn't believe the Father, Son and Holy Spirit were united in the trinity.
[6] Helen Maria Williams, wife of Edward.
[7] It is known that Elizabeth suffered from scarlet fever and passed away approximately 5 years after the writing of this letter.
[8] Butter was an important commodity of the time for cooking and baking. It took much time effort to make because of the churning that went into production. The Huntingtons often tried to send their children butter from their farm along with letters.
[9] Located west of Amherst, Massachusetts between Connecticut River and Amherst.
[10] Speakers stand in a church. In many Christian churches, there are two speakers' stands at the front of the church, the one on the left (as viewed by the congregation) is referred to as the pulpit.
[11] Unlikely to be same Helen mentioned above.
[12] Also known as pneumonia, a disease of the lungs that is characterized especially by inflammation of lung tissue. This disease is accompanied by fever, chills, cough, and difficulty of breathing and often results in extreme fatigue or drowsiness. Charles and Helen Huntington's daughter Mary was born in 1840 so she was just two at the time of this letter--she recovered and lived into her 80s.
[13] No address except the name and town is necessary because resident would go into town to get their mail. 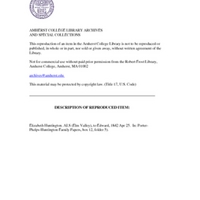