From the letter, we learn that the Edward had been writing to her consistently, yet this letter was one of the first responses. Elizabeth used to think that Edward had been in solitude but had learned of all of the things he was doing and being a part of. She thought that her letters were the only thing in his life, but it turned out otherwise. His brothers and their families recently journeyed from Providence, and they were able to safely travel back home. Helen had gotten sick from the visit to Elizabeth’s. Elizabeth gives Edward all the family events and occurrences that had happened since he was gone, including his family meeting with Mr. Cunningham. She implies that he probably gambled too much. There is also a new plan for a meeting house in town. His father had recently gone through rheumatic pains, and he is still struggling. Elizabeth fills Edward in about the other members of the family, says that Bethia is sewing and his father is indebted to him. This letter to Edward shows that Elizabeth wanted him to know everything he has missed since he had been gone. She waited a while to respond to him, but she still wanted to give him an update on things that affected his family and community since his absence.

Dec. 13th 1841- Dear Edward,
From a remark in your last letter to Bethia, I infer that you have done expecting that I should write you. It is very reasonable for you to draw this conclusion, from my having so long neglected to notice your kind attention in writing to me. Strange as it may seem to you, it is a fact that I think of you with far less solicitude, (not with less affectionate regard,) than I did six months ago. I then felt for you as without society, solitary, and by stealth as it were, taking your scanty refreshment.[2] Now, what a change has taken place. Instead of thinking as I then did, that one of my letters might be as relief in the dull monotony of your life, I am rather fearful that it will interrupt the steady current of your present enjoyment. From all that I can learn of your domestic arrangements, I am inclined to feel well satisfied, and even highly gratified, so that dismissing anxiety, I have only to hope for a continuance of the blessings which you enjoy, and that you may be assisted to render some acceptable return to our Common Benefactor and unfailing Friend.[4] Your brothers with their wives reach'd home about three o'clock; and I think we ought to notice the hand of a kind and watchful Providence, which so remarkably prospered them on their journey, and brought them home safely. We were sorry to learn by your letters, by then, that Helen's[6] health had suffered from her visit here. I hope she will not always go home from us sick. We have been rather anxious to hear from you, on her account. Before now I trust she is quite well or you would have informed us. Mr. Smith called on Thursday evening and left a letter from Mr. Cunningham. In grasping after too much, he will probably lose it all.[8] Your brothers and sisters – two of the first and three of the last,[9] made a visit last week at Henry Shepherd's.[10] Tomorrow they are to visit Mr. Apthorp [11] – they will probably have some fine musick. The old meetinghouse has traveled as far as Mr. Danforth's garden.[13] The new society or the West street party, have invited Mr. Woodbridge[14] to settle with them and have offered him a salary of six hundred & fifty dollars.[15] The are making preparation to build a meeting house, between Mr. Gaylord's house and Dudley Smith's store.[16] In a letter from Lizzy Fisher[17] which Bethia lately received, she mentions their having had yours of the 5th[18] of August, in which she says you "announced your marriage." "Whether or not the marriage took place we cannot tell, but it is certain that we drank to his health and that of his wife, at dinner, on that day."[19] We have had no letter from Frederick[20] since he left us. In about a month we shall hope to see him again. Perhaps while he is with us we shall look in upon you, if there should be sleighing. Your father has not been able to shake off entirely his rheumatic pains; He went into the woods every day last week and made a fair trial of what chopping would do for it, but it is there yet.[22] Bethia, who is sewing at my side sends her love to you and Helen. Your father on the opposite side of the table is absorbed with a newspaper. He is indebted to you for the amusement of many of his leisure hours.[23] I was at Charles' yesterday between meetings, Helen has had an augur for a week past. Mills[24] is getting better. The last letter we had from William[24] came while you were here after your marriage. As you and Helen are one, she of course will take her share of what is written to you, especially in the affectionate regard with which I subscribe myself as ever your mother
Elizabeth 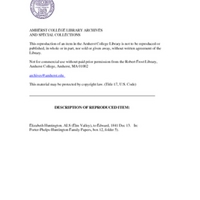