In a response to Frederic’s previous letter, Elizabeth begins by assuring him that she had received his letter, and that there had been confusion with the gift he sent to his father. She explains that Helen has grown sicker but is still alive, which Elizabeth believes is God’s doing. Helen and Elizabeth attended Mr. Ellis’ Sabbath in Northampton, and he read the first chapter of Malachi. Elizabeth shared her disappointment on Frederic’s short visit, but assured herself with a bible quote “a man shall leave father and mother and cleave to his wife.” She professed all of the reasons why she loves Frederic, her youngest son, and believed that God will reward him for treating her so well. A magazine containing Frederic’s sermon arrived at Elizabeth’s household from Theophilis. She marveled at reading his sermon, and noted that Elisa’s mother said it was “of rare excellence.” Elizabeth assured him that the family was healthy, thanks to the “goodness of God,” although some are having toothaches. Meanwhile, Theodore purchased an organ from Mr. Davis of Greenfield. She closed the letter by expressing the importance of Frederic committing to the Almighty Father as a guide until his death. 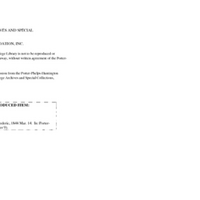