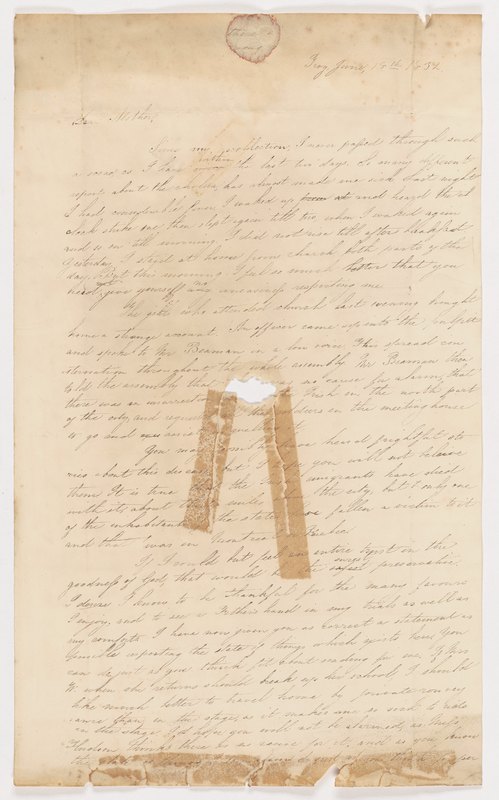 Dear Mother, Since my recollection, I never passed through such a scene, as I have ['since' crossed out] within the last two days. So many different reports about the cholera, has almost made me sick. Last night I had considerable fever. I waked up ['from at' crossed out] and heard the clock strike one then slept again till two, when I waked again and so on till morning. I did not rise till after breakfast. Yesterday. I stayed at home from church both parts of the day. But this morning I feel so much better that you need ['not' crossed out] give yourself no ['any' crossed out] uneasiness respecting me. The girls who attended church last evening brought home a strange account. An officer came up into the pulpit and spoke to Mr. Beaman in a low voice. This spread con-sternation throughout the whole assembly. Mr. Beaman then told the assembly that [hole] was no cause for alarm, that there was an insurrection [hole] the Irish in the north part of the city, and requested all the soldiers in the meeting house to go and assist in quelling it. You may possibly have heard frightful stories about this disease, but I hope you will not believe them. It is true that the Irish immigrants have died with it, about thirty miles above the city, but only one of the inhabitants of the states has fallen a victim to it and that was in Montreal or Quebec. If I could but feel an entire trust in the goodness of God, that would be the ['safest' crossed out] surest preservative. I desire I know to be thankful for the many favours I enjoy, and to see a Father's hand in my trials as well as my comforts. I have now given you as correct a statement as possible respecting the state of things which exists here. You can do just as you think fit about sending for me. If Mrs. W. when she returns should break up her school, I should like much better to travel home by private convey-ance than in the stage, as it makes one so sick to ride in the stage. I hope you will not be alarmed, as Mrs. Hudson thinks there is no cause for it, and as you know the state of things I say again do just as you think proper.