Elizabeth is writing this letter to her youngest child, Frederic. She begins by saying how it has been so long since she has received a letter from him and hopes everything is still well. She goes on to wish “little George” a quick recovery as well as Hannah, who was also “quite sick.” Elizabeth then begins recapping what is going on at home: housekeeping with Mrs. Wright, David moving in with Mr. Hockbridge, the “young lady” from the house above learning to cry, and Elisa “getting along very comfortably.” Elizabeth finishes the rest of the letter on Sabbath morning. She begins this section by saying she received a letter from the first society in Northampton requesting furniture and bedding donations to help decorate the seamen’s home in Boston for some sailors.

She then asks Frederic to compare the seamen’s friend society to the seamen’s aid society to see if they are united or if they both equally deserve assistance. Elizabeth then finishes up saying what’s going on at home by including Caroline Bulfinch’s arrival, Mr. Bulfinch’s preaching in Hartford, Mr. Nightingale’s settlement in Cabotville, Theodore’s printed work that Mr. Huntington said was “well written,” and William’s employment at any vacant parish. She ends the letter by saying that spring is coming in nicely and hopes that Frederic will fulfill his promise in visiting his parents. She signs it off as “truly your devoted mother Elizabeth.” 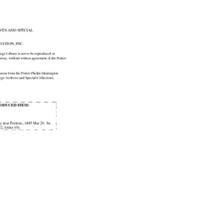