Elizabeth is essentially expressing her concern for Edward’s lack of communication over the last month, however she is not particularly upset or frustrated in her tone, just genuinely concerned. She states and admits that he has done such a good job at keeping his family updated with letters until now, and that she should probably take the time to write back to him. She uses this letter as a way to keep Edward updated with everything that has been happening in the town recently. She mentions the birthdays of Catherine and Mary, the sisters who had died in 1830 and 1839. To mark their spring birthdays Dan Huntington planted two young willow trees near their graves. She talks about parties and other events around town, including the Fishers’ renting an old-fashioned house for the year. Later on, Elizabeth discusses religion and church politics, describing a situation where the town’s minister, Mr. Ellis, has been invited to choose whether or not to go to a new district to preach. Elizabeth suspects that he will decide to leave Northampton for the new town, but owes the preacher’s decision to God knowing best and looking after their town. Elizabeth talks of the change in seasons at the end of the letter, again tying in how these beautiful sights are the “smiles of the Creator”. Elizabeth mentions that Edward’s father is renewing his strength by working every day, and that his family overall misses Edward. She describes listening to a pastor Mr. Hale at Charles Huntington’s house on the sabbath as well.

Elm Valley May 10th, 1843–
Dear Edward,
It is much longer than usual since we have had a written communication from you, and I begin to feel as if something ought to be done - if i rightly remember, your last letter was written and sent the day after fast in answer to a few lines I wrote you on that day by Cotton Smith[1] - you have been so kind and attentive heretofore, in giving us frequent intimations of your movement, and welfares, that perhaps we expect too much in this way - forgetting to do our own part in the business.
Birthdays come frequently during the months of spring. Allusion to them in letters or in conversation, are always welcome. Last monday brought with it many recollections of our lovely Catherine - indeed ever since Mary's birthday - the loving and beloved sisters have been more in my thought than usual. Last saturday I rode with your father to the little plot of ground, made sacred by the remains of the early dead. He placed in the two corners next the avenue, two willows, which had been growing in the garden several years for this purpose - I wish they may live and flourish - But whether they live or die, of this we are sure, the immortal spirit is not there, and the good never die. It is a thou't, full of deep and thrilling interest, that we may in another life meet and know our dear departed friends. How earnestly should we strive to prepare ourselves for the resurrection of the just!
Mrs. Fisher is very busy in preparing to keep house. She was here on monday with Mr. Fisher; they came with a carriage and a horse which he has bought of Sam. & Lyman, you have probably been informed that they have hired the house occupied by the late Mrs. Henshaw - about as old fashioned as ours with low rooms and beams running across the upper part but it is only for a year that they have taken it.

Thursday afternoon. There is to be a donation party at Mr. Bernans this afternoon at 5 and the Phelps and Huntingtons are invited. Mrs. Phelps and the young girls are going from brothers, and your brothers and their wives have made arrangements to attend also doubtful he has need enough of a gift. What says Mr. Buckingham about staying with you? Or what say his society of keeping him? The people of Rochester have had the presumption to send on to the Unitarian society in N-n, a prosing request, enforced by various powerful arguments, that they will release Mr. Ellis[2] from his engagement, and hand him over to them. The good people in N-n, after expressing their views of the case, and their unabated attachment to Mr. Ellis - have released him from his engagement, and left him at liberty to decide according as his judgment and feelings shall detail - so perhaps we shall not have a minister after all. Well, the Lord reigns - let us say Blessed be God - he knows what is best - and he reigns in wisdom and in love - we need not fear to trust in him - we need fear only when we withhold our confidence and love from him.
At the beginning of this letter I observed that your letter to me, was the last we had received from you. This was a mistake - Theodore has had one since, perhaps three or four weeks ago - in that you mention having had a visit from Mr. and Mrs. Apthorp and that Caroline was wishing to return home but was detained by the mud. The water has been over the meadow longer than it was ever known to be, within the recollection of any one now living. It has now subsided but there is yet a good deal of water in the hollow. The knoll next the river looks like a bank of sand. But the grass around us is springing up beautifully and the leaves are coming out, and the flowers, those "smiles of the Creator," are waiting at our feet – what a cheering and inspiring hope does the bursting forth of nature give us, of the resurrection of the body, when "this corruptible shall put on incorruption and this mortal shall put on immortality."3
Your father is renewing his strength if not his youth. He is working steadily the greater part of every day - Bethia remembers you with sisterly affection. We all hope to see you before long with your wife.
I suppose your garden is all planted and growing – I believe your father has been putting the fruit seed into our garden today. We went over on the sabbath and heard Mr. Hale. All at Charles; were well excepting his wife, who has been troubled with her cough and took antimony to relieve it - which occasioned vomiting. 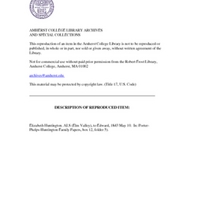