Elizabeth feels it is hazardous to attempt writing to Edward due to the way recent letters have created hurting feelings among the family. Elizabeth is worried she will offend someone she writes to. She understands there must be a certain time in which issues between family members will still remain, but she does not intend to offend anyone. Therefore, she tells Edward they must write to friends such that they make them more comfortable, rather than less comfortable. Elizabeth tells Edward of her and the family’s travels and that Elizabeth was nearly sick, but got better. She hopes to see Edward at Caroline’s wedding next week.

Elm Valley - Dec. 19th 1842 - Monday -
Dear Edward,
I have been for an hour or two debating this question in my own mind, whether I had better write you a few lines by Theodore, or not. I have been strongly inclined to do it, for ever since I made you my long visit, I have been writing to tell you how much I enjoyed it, and how many pleasing thou’ts I have had since, in recollecting it. But there are on the other hand some considerations, which make it rather hazardous to attempt writing. It seems to be a stormy time with the correspondencies of our family--hardly a letter passes in which there are not some expressions which give offense or at least uneasiness; and it is not improbable that I who am so zealous in the cause of universal Peace, may be so unhappy as to injure the feelings of some individuals to whom I write. Offenses given by writing are the cause of peculiar evils in conversation a word spoken inadvertently, if it injures the feelings may be so explained as to leave no unfavorable implications; but if such things are written, there must of necessity be an interval of time, in which the trouble will remain, and the feelings of course be disturbed. I come then to this conclusion, that when we write to our friend we had much better write in such a manner as to increase rather than diminish their comfort. On Saturday morning I went with your father, (who was going to Deerfield) to Northampton and stayed at Charles' till yesterday after meeting - when I returned with Bethia and Frank - Theodore taking his turn in staying at home. Elizabeth was pretty near sick the night she came from Cabotville, but with good nursing and the blessing of heaven, she has become quite comfortable again. Your uncle has been in this evening to send to you by Theodore a formal tho verbal invitation to Caroline's wedding, which they intend to have celebrated next week Tuesday evening - - come if you can, it need not take you more than twenty four hours - most affectionately yours and Helen's - Elizabeth
Mr. Edward P. Huntington
Cabotville 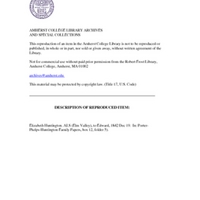