Mary tells her mother of Mr. Merrick’s sermon upon his arrival to town. He spent more than an hour to indicate the character of God and denies the doctrine of original sin. Mr. Merrick says he is an abolitionist. Mary is pleased with him and thinks Elizabeth and Bethia would be pleased as well. However, she does not agree with all of his teachings. Mary then discusses a party she attended at Mrs. Dennings’ with her sister. She thought it was a strange way to prepare for the Sabbath. She asks about her mother’s Thanksgiving and says Thanksgiving is celebrated more in Massachusetts than in New York. She is glad Caroline decided not to go to the South. She asks for money to buy a bonnet. On Tuesday, Mary writes because Mrs. Fisher did not let her help make applesauce, so she thought writing a letter back was a good use of her time. Mary wishes to have heard Mr. Stearns’ sermon. She thanks her mother for her advice to be undefeated by temptations.

On Thursday, Mary says she had been busy working on making a hood out of silk since the last time she added to the letter. Mr. Fisher left for Utica. She wants Bethia to cut out her leaf impressions for her. She also tells her mother of Theophilus’s interest in Augusta, and she wonders if she is good enough for him. She apologizes for talking so much about Mr. Merrick’s sermons. Mary includes a P.S. to mention she is not prejudiced against those new religious teachings such as those of Mr. Merrick.

Oswego Dec 2nd 1834
Dear mother,
It was with the greatest joy that I received your excellent letter. It was exactly what I wished, and could not possibly have been altered for the letter. How thankful ought I to be for so many favours as I am continually receiving!
I am going to give you some account of the new measure people, or at least, of one of their ministers. Mr. Merrick arrived in town last week, + last Sabbath we heard him both parts of the day. Last night he delivered a lecture + we attended that, also. It was the evening for the monthly concert, but he was not aware of it until he reached the house. Of course he was obliged to arrange his thoughts in a different train from what he had at first intended. He spoke above an hour, I should think from these words “thy will be done on earth as it is in Heaven,” and I never before knew how much was contained in that short clause. He first observed that the will of God, was, loving the Lord our God, with all our hearts + our neighbors as ourselves. He then endeavored to prove that it is possible to do the will of God here as it is done in heaven, from the fact that Christ would not have connected it, had it not been practicable. He next gave his opinion of the manner in which it is performed in Heaven. There were nine particulars which he enlarged when among which were these. It is done constantly, heartily, cheerfully, harmoniously, honestly, perfectly, + perpetually increasing. He thinks obedience to God can be perfect in this world in kind, not in degree. Some he said would deny this because we never see Christians here who are perfectly happy. But he says this is on account of the circumstances of their situation not corresponding with their feelings. Paul had continual sorrow of heart + our [] was a man of sorrow, + acquainted with grief. There is a great deal of sin here, but in Heaven every circumstance will be in unison with their feelings + perfect happiness will be the consequence. He takes a great deal of pains to indicate the character of God, + on this subject he is quite eloquent. Hence he denies the doctrine of original sin. He cannot think that anything could come from the hands of its maker imperfect. He said in so many words that he was an abolitionist. That he was for abolishing, not only the slavery of men’s bodies, but of their souls. That it is a command of Christs’ + must be [complied] with. He is very liberal and preaches against no [] I believe except the [Arhaomians] + Universalists. In short, he is quite an original. There is something in his style [peculiar] to himself, and with which we should be disgusted if initiated by another. He gestures almost constantly + with so much unaffectedness that he appears to throw his whole soul into what he is saying. He is to preach every evening this week. Tonight his subject is Christian Union. I am
quite curious to know what he will say. I think you + Bethia would be pleased with him. Lest you should think I am becoming one of the new [lights] because I am pleased with him, I will tell you that though I do not approve of all I have heard of their movements, I have as yet seen nothing to condemn, I think every Christian should love + revere the image of their Master.
Will Frederic attend there this winter? I have not yet forgotten to send [him] the Courier sometimes.
I am glad to find Mrs. Wells is disposed to be so sociable.
Have they given up the tavern?
Last Saturday evening sister and I attended a party at Mrs. Denning’s. It was a very gay one, and to me a poor preparation for the Sabbath. Mrs. Bard was there and I found it seemed quite so strange to her as to me. Mrs. Denning has a sister with her who expects to have her this week, and it was on that account I suppose that the party was given at that time. It was nearly eleven when we reached home.
How is it that dame Wilson has disappointed you?
I thought she would be a great assistance to you this winter.
Your [ ] with the washing quite surprised me. It is almost “getting done before breakfast.”
Next week is your Thanksgiving. In this state it is a fortnight from that time. The New Yorkers do not make as much of it as the Yankees.
I regretted that I did not see Caroline give my love to her if you please and tell her that I am glad to hear that she is not going to the South, and hope she will find some more agreeable situation nearer home.
I find I have not quite money enough to get a bonnet. [Five] dollars I should think will be sufficient with what I have to get a Tuscan. It is with reluctance that I ask you for it, but as my old bonnet is rather shabby, and you told me before I left home to get one on arriving. I thought I would tell you just how it is. I will try to be as economical as possible. Please to give a great deal of love to all the family, and remember me to the cousins. Favour me often with your letters, your truly affectionate daughter

Tuesday
Mrs. Fisher is making apple sauce today and as she has turned a deaf ear to my request to allow me to assist her. I have thought I could in no way employ my time more pleasantly than in answering your letter, my dear Mother. Your letter was very interesting and has been much in my thoughts since I perused it. I am glad Bethia has made a visit to Greenfield. I hailed the account of it as an omen for good. For if you had been very much pressed with household concerns, I knew she would not have left you. I am glad also on her own account, for she has been confined at home for a long time. I should like to have heard Mr. Stearns’ sermon. I know from the text it must have been instructive.
I should like to have some of his leading ideas.
I thank you for the cautions given me in your letter. I regard it as one of my richest blessings that I have a mother who can so kindly warn and direct me, and I have hope and pray that it may not be my condemnation that I have slighted these warnings [] refused to be guided by these directions. I agree with you in thinking that the most effectual way of walking undefeated through the temptations of the world, it is to rise often in contemplation to that better world [whither Jesus] the forerunner is for us entered. Thus it is that sets things in their true light and affords the “peace of God which papeth understanding” to the soul Wednesday morn. I suppose yesterday the term closed at the academy.
Wherever they find it, + I must say I think he appears to His likeness.

Thursday. Since I commenced this letter, I have been a good deal occupied in making me a hood, of the silk that I brought with me for that purpose. The weather here is so cold, that this article seems almost indispensable.
Mr. Fisher left this morning for Utica. He expects to make several journeys this winter, one of which he thinks will be to Boston. It would be a fine opportunity for any one who wishes to go to Hadley. I proposed to sister that she should go, but she rather declined. I believe I must trouble sister Bethia to do an errand for me. In the upper middle drawer in my bureau, I think [ ] will find those impressions of leaves that I took last fall. If she will cut out some of the largest + handsomest of the forest leaves and send them to me as soon as convenient I will be much obliged to her. I wish to make some card racks for sisters ^parlour We have sent to Whia by Mr. Fisher for the materials.
I was glad to hear that you + Bethia had purchased some new cloaks. You very much
needed them.
There is to be a cotillion party this evening at the Welland house. I received a note of invitation Tuesday, but shall not attend.
Theophilus really was smitten with Augusta. Pray how it is with her? I hope she is good enough for him. Perhaps I ought to apologize for introducing so much of Mr. Merricks sermons into my letter, but I thought if our tastes were at all similar you would like to hear about it. He visited here yesterday. Did not make make me [make was written twice] many practical observations, but he + Mr. Fisher discussed the subject of the Trinity pretty thoroughly. Give
the greatest love to all, + dearest mother do write often to your affectionate daughter

P.S. Perhaps you will not be able to understand what I said at the bottom of the second page. My meaning is this, that I see in the new measure people much that I like, and, as many are prejudiced against them , I am willing to help correct that prejudice, and as far as they are instrumental in doing good to give them credit for it. 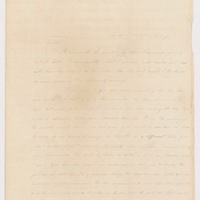 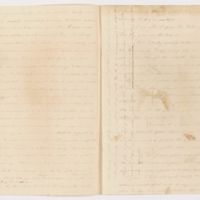 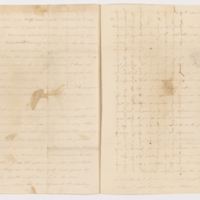 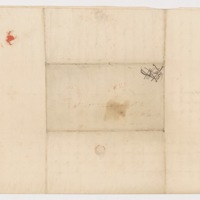