Mary is writing a letter to her mother about her arrival at Oswego. The first half of her letter she talks about the journey itself, she discusses how she felt sick at one point but has since gotten over it. She then talks about the friends she made in her short time in Oswego. After that, Mary exclaims how much she misses her family back home, but then quickly transitions into how the weather has been since she has been there. She then quickly closes the first part of the letter because it is growing dark.
After the initial part of her letter, Mary writes a lengthy ps. which mainly details what she has done each day. Mary starts her postscript.s by saying what expenses she has accumulated then goes into her day by day account. The first part of her recounting her days is heavily focused on her religious encounter with the people she has been around. She talks about how she may have to conform to their beliefs while she is there in Oswego. Once she finishes talking about the religious portion of her day by day accounts she goes into the ladies she has interacted with since arriving to Oswego. She says the belles are a pleasure to be around and looks forwards to more interactions with them, and jokes that she hopes she does “not become dissipated.” Before she closes her letter again, she notes that she hasn’t been into the town except for church and anticipates going soon. She closes her letter by stating how she misses her family and sends her love and reminds them that they are all protected by the love of God.

My dear mother,
I am happy to inform you of my safe arrival at Oswego. We reached here last evening about sunset. The night after you left us we slept in [what is this?] and the next in Syracuse. The first two days I [what is this?] in the boat I suffered considerably from sea sickness, and consequent sleepiness and want of appetite. Before I arrived here however these disagreeable symptoms had left me, and now I feel more like myself again. I met with a very hearty reception on my arrival here. Francis seemed a little doubtful at first, but soon achieved his acquaintance
with me. Poor George I found quite ill with a cold, today he is much better. Lizzy is as affectionate as ever.
I have thought much of you and sister Bethia, and generally imagine you hard at work. I need not say how much I wish you could have more help. Until today the weather has been as fine as could be wished but this snow storm really reminds one of winter. Storms are very frequent here, much more so then with you in New England.
I believe I must close my letter now as it is growing dark. I think I have cause for great gratitude in having been so highly prospered during my journey. I shall hope to be present in ship it with you to be morrow though absent in form.

Write soon to your affectionate daughter,

P.s I kept an account of my account of my expenses after I left father and found that they amounted to eight dollars and six cents. Mr. Poond wrote his sister that they would be about six, but I suppose he did not include that part of our route between Syracuse and Oswego.
Monday noon. I had no opportunity of sending this Saturday, and if not disagreeable to you will relate what has occurred since that time. Saturday evening is not observed in Mr. Fisher’s family and I have concluded to fall in with their practices while I am with them. Sabbath morning I heard Mr. Fisher expound some parts of the Bible. I believe he thinks me heretical on some of the doctrines and sister says I must expect to be converted to his opinions before I leave. In the afternoon we heard Mr. Condit [what is this?] the sacrament. I was busy with [what is this?] this morning, and had just seated myself quietly to my work when who should enter but three of the Oswego belles. They seemed quite agreeable during the short time that I saw them. It is said there is a large circle of young ladies here, and that Oswego is rather gay. I surely hope I shall not become dissipated. I have not been out yet except to church, but expect to go down in the village this afternoon with sister. I think much of you all and [indecipherable] the sincere wish of my best that though separated, we may all be guarded by our Heavenly Father. 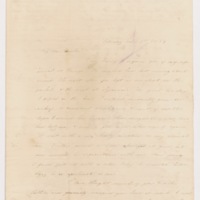 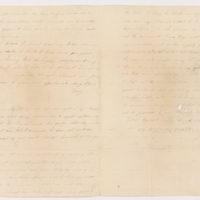