This letter actually contains a letter written on November 18, 1843 and a lengthy postscript and shorter sidebar written on November 26, 1843. A major portion of the letter is devoted to reporting the death of Edward and offering praise of his character and sadness over his loss. The letter also provides news of two women named Helen – one who has gone to Deerfield for a few weeks and is overdue to return and the other who appears to have been gravely ill in the recent past but appears to Elizabeth to be in much better condition than the doctors had led her to believe was possible. The letter also speaks highly of the local minister who provided comfort to the family in Edward’s illness. Throughout the letter, Elizabeth makes numerous references to religion, spirituality, and prayer. She appears to be a woman of great faith, which is not surprising given that her letter is addressed to her son, who is a minister.
In the postscripts, Elizabeth writes of mundane matters such as the price of butter and offers to send butter to Frederic. She also explains the tardiness of the original letter and the presence of the postscript, adding that Helen has now returned home and setting out the Thanksgiving plans for various people. It appears that at one time, Elizabeth intended to enclose as separate letter from Lucy Parsons, but later (in the sidebar) Elizabeth explains that Lucy’s letter will be sent by a different means. 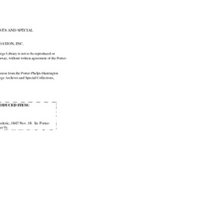