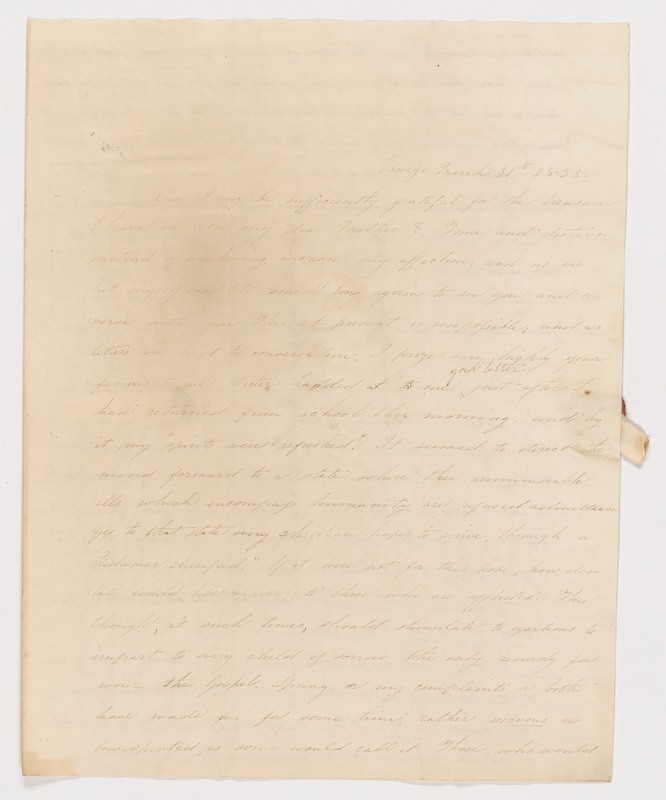 Can I ever be sufficiently grateful for the treasure I have in you my dear mother? Time and distance instead of weakening, increase my affection, and no one but myself can tell how I long again to see you and converse with you. This at present is impossible; and as letters are next to conversation, I prize very highly your favors to me. Sister handed (“it” and “to” look purposefully crossed out) me your letter just after I had returned from school this morning, and by it my “spirits were refreshed”. It seemed to direct the mind forward to a state where the immemorable ills which encompass humanity are refused admittance yes, to that state every Christian hopes to arrive, through a “Redeemer Crucified.” If it were not for this hope, how desolate would life appear, to those who are afflicted! This thought, at such times, should stimulate to exertions to impart to every child of sorrow the only remedy for woe - the Gospel. Spring, or my complaints, or both have made me for some time; rather nervous or low-spirited, as some would call it. Those who would judge me harshly on this account, must before they pass sentence place themselves exactly in my situation, and then perhaps they will not be severe. When writing to you I tell all (“my” looks purposefully crossed out) that interests me, and feel assured that you will listen with an indulgent ear. But I can say, that in my afflictions I have had at times such views of eternal things as will I hope be profitable to me. Adieu for the present. Tuesday morn I am sorry to hear that Caroline cannot find a situation as a teacher. Has she returned from Northampton? Spring is opening delightfully with us. The ground is nearly settled, and the appearance of the village is quite lively. The boats are being repaired and the canal I suppose will be open in a fortnight. I can hardly realize that I have been here twenty two weeks. Time has passed away quite rapidly, and alth’o a great part of the time I have been out of health, yet I must own that I have enjoyed much -- more than I have deserved I am sure. You and sister B must have been greatly confined, but I am glad to hear that you have gone out occasionally. I hope after my return to be able to relieve you in some measure. Thursday morning yesterday brother and sister and Elizabeth and I took tea at Mr. Swift’s. They are very friendly and agreeable people. Part of the Academy is to be fitted up for a boarding house, and they intend removing there the forepart of next month. We had music in the evening. Mr. Swift is a fine singer and he accompanied his daughter while she played on the piano and sang. In mixed company they say very little of their religious peculiarities but when alone with those of the same opinions, it is easy to tell on which side their sympathies are enlisted. [hole in page] I am going to propose a plan for Caroline’s [hole in page]. There is no good school here for giving child [hole in page] have been asked if I would after the present term take charge of such as one. A gentleman who has a little girl to send says he thinks a school of twenty scholars might be supported, at the rate of 3 or 4 $ per quarter. I have declined, but [have ____ crossed out] Mrs. Fisher thought Caroline might like the situation. None of us wish to assume any responsibilities, as it might be unpleasant in case of failure. They wish to have a teacher who would consent to remain some time perhaps two years, or three. I will thank you to propose it to cousin, and should she be willing to undertake it, some farther arrangements might be made. I find as the warm weather advances that I need more summer frocks. If I should remain longer than the first of May, I should like to have my French muslin sent, and my white cotton stockings, by the first opportunity. Indeed they would not come [hole in paper] now if I had them here. I am undetermined yet whether to remain [hole in paper] home at the close of the Term, but am waiting advice from home. If my health should be perfectly good I should like to remain with sister until the middle of June, but shall follow your advice in this as I endeavor to do in every other respect. Navigation on the lake has commenced. This morning three schooners sailed off majestically from their winter quarters. We are waiting to learn more of Theodore’s plans. Please give my warmest love to all. Do not be afraid of writing me too often. If you will answer this as soon as I did your last you will confer, a great favor upon your very affectionate daughter.

Mary (Postscript written in pencil as opposed to ink) Mr. Demming and [Mr. Pair] will be in N. York next week – Perhaps Edward will see them + can deliver then my bundle of clothes if you think it worthwhile to send them.