Elizabeth starts out by telling her son (Fredric) that it is much easier for them to receive his letters than for them to send them out. This is because of all their “inquiries”, which one can assume are sending letters to the various members of the family.
Next, Elizabeth talks of a hike that Dan Huntington (her husband), Bethia (her daughter), and she went on over Pheasant Hill. This seems to be a place they visit often, likely on their property, because Elizabeth speaks of resting on a seat that Fredric made. She goes on to say that they talked a great deal about Hannah, whom Fredric married in this year (1843). They are excited for the couple’s planned visit, and are eager to learn more about Hannah.
Moving forward, we learn that the water is abnormally high. This is likely from a combination of spring rain and possibly late of snowmelt. The high waters have hindered interaction between the Huntington’s and their friends. Also, we see some sickness going on, as Helen has a cough. We learn that, although Doct. Thompson gave her some medication that made her vomit, but she seemed to be herself the last time Dan went to visit.
Throughout the rest of the letter Elizabeth’s writing becomes much more religious. She seems to be giving her son guidance for his “semi-monthly meetings”, and stresses that he not overlook the lower class. Continuing, she explains that the society of Northampton is not in a great place. She is referencing information that was probably talked about in previous letters, but likely it has to do with some kind of religious contention.
The letter ends with Mother wishing her son good fortune and a religious reference. It seems this was a very typical letter from mother to son, and likely follows a format that is used quite often: explaining what is going on at home, asking questions about her son’s life, giving advice, sending good wishes, and ending with a religious reference. 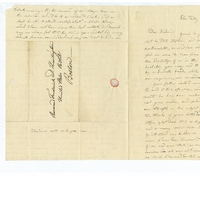